Home » How to Play Video Poker

How to Play Video Poker 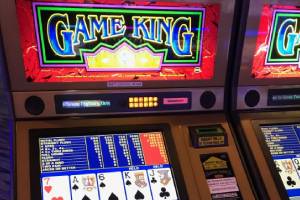 Poker is perhaps the most famous gambling game in the world. Who has never tried, even just for fun, to make a “little game”, trying to get the most famous combination, that is the four identical cards, announcing “Poker!” (four of a kind), which has always identified the game in the collective imagination.

Even poker in itself is not a complicated game in its development, it is merely a distribution of cards, among which the player chooses the most advantageous to keep while receiving others instead of those discarded, and finally checks if he has received a useful combination to win. That’s all. Really, that’s all? Oh, no, the game of online poker UK is above all the thrill of confronting other players through bets, to get to beat everyone.

The popularity of poker has led to the devising of more immediate variations on the top UK online casinos, which deal with the various scores of this game and where there are few decisions to make. The realization of these variants has resulted in the creation of a game system similar to that of slot machines, namely video poker.

How to play video poker – The history

Classic video poker was born almost simultaneously with video slots in America. video poker initially had a simple structure in which the coin was inserted, the lever was pulled and the score obtained with the cards was evaluated. At that point, the winnings were collected, which at the time consisted of cigars, drinks, or the like.

Over time, of course, the game underwent an evolution, especially after the transition to game management through dedicated software. From that moment, video poker experienced a rapid spread in all real casinos and in many gaming rooms, bars or meeting places, as well as on the internet, in conjunction with the rapid progress of web communications and the birth of online casinos.

Video poker, thanks to the skilled work of game platform developers, the first of which was Microgaming, features excellent graphics and exceptional fluidity in the game mechanism.

The mechanism of video poker

Video poker as a game mechanism originates from the well-known “Poker 5-Draw” (draw of 5 cards) and is very simple in its execution. The game begins with the choice of the bet to be made by the player. This is done via two buttons, one for the single bet and the other for the maximum expected bet.

Subsequently, the player presses the “deal” button and 5 cards selected by the machine through the random number generator are dealt, and then displayed on the monitor. Once the hand has been obtained, the player must decide, based on the score he has obtained, whether to stand, then be satisfied with the cards obtained, or change up to four cards of his hand, selecting the ones he wants to keep.

There are no further bets or raises, as in traditional poker, once the new hand is obtained the score will be evaluated and, if it is one of the winning combinations listed in the paytable usually located at the top of the screen, the machine will to credit the corresponding winnings.